The exploitation of people over eighteen consists of recruitment, harboring, transportation, or obtaining a person for labor purposes or services by force. Child sexual exploitation usually involves forcing or convincing a minor to partake in commercial sex. Many of the sexual offenders not only get pleasure from exploiting people for sex, but for being able to manipulate and control another being as well. 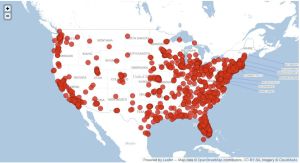 Clearly there is a large amount of trafficking happening, there a millions of people around the world, that have become victims of sex trafficking and sexual exploitation. Many of these sex workers are underaged, children are easiest for sex traffickers to target because they generally can’t fend for themselves and will believe a lot of what they are told. Sex trafficking is happening all over the world, but has begun to be brought specifically to the U.S.

In the early 2000’s Lakireddy Bali Reddy, a wealthy Indian-American Berkeley landlord, was charged with transporting minors for forced sexual activity, and also for conspiracy to commit immigration fraud and filing a false tax return. Bali Reddy was smuggling undocumented Indian immigrants to work as servants and his personal sex slaves. He was eventually caught when his sex slaves, 17-year-old Chanti Prattipati, was found dead and sister,15-year-old Lalitha, unconscious, by roommate, Laxmi Patati, from carbon monoxide poisoning in one of his Berkeley apartments.

Lakireddy Bali Reddy plead guilty on all counts, but was only sentenced eight years and was allowed to serve the time in Lompoc Prison, a luxury prison. Despite all of the pain and exploitation Lakireddy caused his victims, he was let off easy.

Many of his victims are still undergoing some posttraumatic stress. He took people from their country, brought them into unknown territory, and forced them to work for him. Young girls without their families were being made to have sexual intercourse with Bali Reddy at his every command.

As a result of cases like that of Lakireddy Bali Reddy, there have been many advocacy groups created to help end the exploitation of the victims of sexual labor. One of the more well known groups is the Polaris Project. The Polaris Project’s goal is to take action and fight against sex trafficking. They not only fight freedom in the U.S., but also globally, their priority is to ensure the wellbeing of sex trafficking victims.

The Polaris Project was founded by Katherine Chon and Derek Ellerman. While in college they read in a newspaper that a nearby massage parlor had been a front for a brothel, and inside the building, police officers claimed to have found six Asian women with cigarette burns on their arms who were being held there by debt bondage. This story inspired them to devote themselves to preventing similar instances of exploitation from happening. Katherine and Derek created the Polaris Project just before graduation in 2002, “a day dedicated to generating attention to stop violence against women and girls.” Over time they were able  to encourage the passing of legislation in 48 states that helps to protect victims of human trafficking. The Polaris Project is run by donations, the organization gets support from foundations,  the Government, individuals and corporations regularly.

In 2000, Congress passed the Trafficking Victims Protection Act (TVPA), which created the first federal law about trafficking, focussing primarily on the international aspect of trafficking. The law works by using a prevention tactic,  spreading public awareness programs overseas. The U.S. Immigration and Customs Enforcement (ICE) is one of the lead federal agencies charged with enforcing the TVPA.

ICE, like the Polaris Project, is on a mission to fight human trafficking. They are combatting the situation by trying to prosecute traffickers, and help save victims. Although the program reaches international levels, a big source of the problem remains local. Police officers, patrol officers, investigators, and detectives are constantly on the lookout for signs of trafficking. They look at locations, massage parlors and motel rooms have become known hotspots for commercial sex, they look at domestic abuse calls, and they also check for identification. Traffickers often steal victims’ identification, and in international cases, they don’t have U.S. identification.

Preventative measures are being taken by law enforcement and advocacy groups to not only help save victims and stop traffickers from obtaining new ones, but to help protect human rights and violence against women.

Because 90% of sex trafficking victims are women and girls, advocacy groups mainly aim their focus at the female population.These groups are trying to raise awareness about the violation of human rights occurring consistently throughout the United States. There are already laws made to help prevent these violations such as, article 35 of the Preamble; States Parties shall take all measures to prevent the abduction of, the sale of or traffic in children for any purpose or in any form, as well as article 3 of the Universal Declaration of Human Right stating that a person has the fundamental right to life, liberty, and the security of person. These laws are not as effective as they were intended to be, which is why these groups are taking such large measures to ensure that human rights are not violated.

Because of the advocacy groups and law enforcers constantly fighting to pass new laws around sex trafficking that punish perpetrators and protect the victims, the issues we face around forced sexual labor are looking like less of a threat for the U.S. in the future. However, the U.S. needs to think more about preventing sex traffickers from obtaining workers rather than stopping what has already been done to ensure that the issue actually does come to an end. In order to do that, the U.S. needs to build stronger communities with bigger support groups in bigger cities, because as long as there are vulnerable people, sex traffickers will be able to recruit them.